A deployable structure is one with full motion or in parts, from mechanisms to achieve an increase or a new volume setting, achieving adaptive structures that can be transformed according to the needs of each design, obtaining benefits such as light weight, modulation of the elements, ease of assembly, structural efficiency and the possibility of being transportable to be deployed again and reused the structure elsewhere.

The main architectural background in this research is based on foldability and geometric principles to find the appropriate edges that allow proper operation of the movement (folding and unfolding) of the structure.Emilio Pérez Piñeros, spanish architect, developed breakthroughs on deployable structures and in two particular cases, the approach in rigid folding covers: “El teatro ambulante” 1961 (The traveling theater), which consists of a dome where the enclosure is composed of mobile segments that allow the opening of the cusp, and the hyper cubic glazed in Dali Figueras Museum (1972), which incorporates a folding from glass panels which unfolds simultaneously with the modular structure.The mobile principles of deployable structures based on linkage bars, scissor system, of Pérez Piñeros, were retaken by the spanish architect Feliz Escrig Pallares in constructed proposals as the cover of the semi-Olympic pool in the city council of Valencia de la Concepción (1999) and in the Auditorium of Jaén (1998), in Spain, he posed steel arches moving horizontally over a rail which have the tensioned fabric between them to achieve a practical deployment process that fits together the structure and the enclosure while temporarily covers a specific area.With the study of other architectural references like Chuck Hoberman’s work which has developed important patents on the scissor system, mechanisms and joints, and the work of Santiago Calatrava, this research aims to retake existing theoretical approaches and concrete applications to feed the architectural and structural design of the deployable stage with a versatile system that reaches a constructive level.

It is based primarily on the development of physical and digital models that allow analyze the possible dimensional and structural failures and the real behavior of the materials through basic drawing programs such as AutoCAD, SketchUp and WinTess3 that allow a structural checking, verifying if the structure is balanced.

Were developed for this proposal several scale models that provided at the time final details for the structural approach and for the proper deployment and assembly process of the stage.

The project consists of a half-circle platform that unfolds horizontally thanks to a structural link bars and folding that make the flooring, which is covered by five tarps sections attached to deployable structural arches, that form a half hemispherical dome when lifted and are set at the top by a central piece which stabilizes the overall structure of the stage. To understand the structure and elements that allow the deployment movement of the stage, below are described each of the parts and geometric approaches that make up the project: Floor structure, folding floor, arches and membrane.

Floor structure: The floor structure is a half circumference radially divided into five equal parts which generates six structural axes for each of the main beams that will support the folding floor and the deployable arches. The unfolding movement of the floor structure is achieved through the articulated scissor-type system. Each axis is articulated by scissors that allow rotating the main axes from the central point following the trajectory of the half circumference, resembling the opening of a fan.

The specific characteristics of the system used in this structure corresponds to ten straight eccentrics scissors articulated between them, this type of system generates curves that depend on the eccentricity of the articulation between each bar that composes the scissor.

Every two scissors articulates one of the major axes of the stage in plant, these axes are the beams that support the arches; the beams are articulated by hinges on the ends, allowing the rotation movement to achieve the opening. 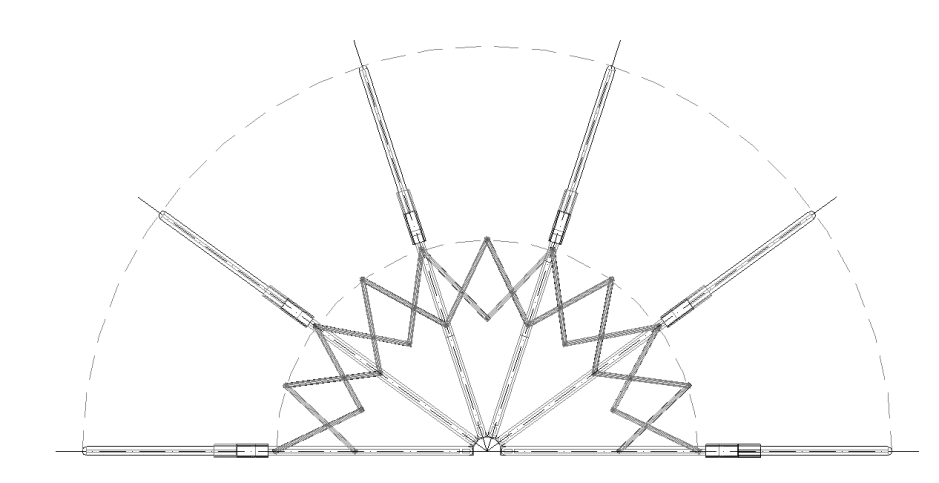 Folding floor: The approach to the folding arises during the elaboration of models, perceiving the movement and direction of the folds that took a cover of cardboard on the floor structure. Geometrically can be distinguished two main parts: scalene triangles forming radiated diamonds at the time of deployment and isosceles triangles that complete the total of the half circumference.

Deployment Process and Mechanical Systems
The stage is transported in a folded way and located in the specific place; each of the main beams has load wheels that allow moving the stage from one place to another. The deployment process initiates with the fixation of the floor structure center through supports that anchor to the ground, then the beams turn radially so the floor fold achieves the entire opening of half circumference by the force exerted of two hydraulic cylinders and the joint between beams through hinges. Also every panel that composes the fold is articulated with the other by a neoprene joint that works like hinge, but is these additional hydraulic cylinders which perform the force and induce the respective movement. 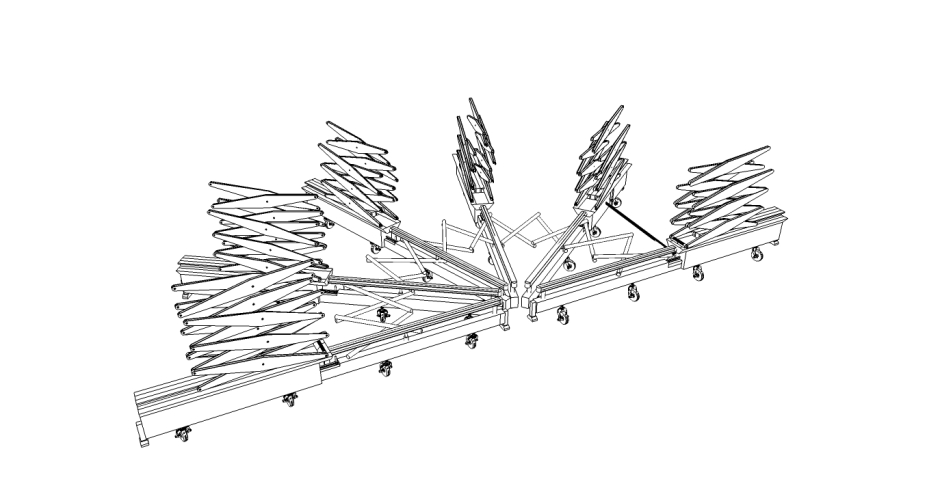 It consists in a stapled shield through rivets to the load band, the shield located linearly only on anchorage points, is designed with eyelets where a carabiner is inserted. The connection system is completed when the carabiner is articulated to the main structure through a terminal with eye which is screwed in the main rotation axis of the articulated bars that compose the structural arch.

Figure 11. Fixation of the membrane to the structural arc.

Every arch is composed by four double scissors, three of them asymmetric, that generate the form of arch in elevation of the stage and in the base of the arch a symmetrical scissor, which contains the joint to the support base and the wheels that allow the displacement of the scissor through a rail allowing the arch to bend and to remain supported on the structural beam. Bushings are proposed as union element between the scissors bars, with ball bearings for every joint.

In the moment that begins the deployment of the arches, thanks to a force exerted by a hydraulic cylinder, the membrane will be raised and closed through the zipper that attaches the two sections, this closing process is achieved through the spool and cable mechanism, which pulls the zipper and allows easing the closing. The spool is installed in the central union of the stage but the cable descends to achieve that the whole deployment process is realized from the floor without the need for cranes or additional machinery.

Although the mechanism for the central union is still in design process, the concept is based on the solution of knots of scaffolding, which consist in articulated headers that reach the same point and can engage and disengage in a safe and simple way to shape a stable knot. Once the arches are deployed and secured to the central union, along with the closed membrane and into position, the structure is stable and ready for conditioning to lighting and sound requirements that requires each event.

This research aims to demonstrate the structural and constructive feasibility of a stage for different cultural and recreational events from the implementation of deployable structures, allowing them to be transportable, adaptable, flexible, easy mounting and quick manufacturing with modular elements.

The result is achieved thanks to the exploration and realization of different physical models through scissor type system, which is established as the best option according to the spatial scheme established. Each physical and digital model, still in study process, has generated valuable contributions for the approach of the structure by clarifying construction and structural potential problems that could arise on stage.

The scissor type system allows the use of modular, easy assembly and lighter elements that allow the ability to open and fold to facilitate its transfer. The proper group of scissors can reach a stable, secure and resistant spatial set.

Refers mainly that this proposal contemplates in its design to be entirely deployable, it is so that the use of folding and membranes as enclosures has carried a geometric study to articulate structure and enclosure in a simultaneous deployment.

The realization of the model in scale 1:10 developed in this research, made of wood, motivates the construction of a model scale 1:1 to observe the real structural behavior and defend its viability under constructive technical standards that commits a cultural infrastructure that will accommodate people, which must accomplish with all security requirements against earthquakes and winds.

The selection of the material for the stage is currently a case of study to define the best features that are attached to the structure, looking for the best structural capacity, lightness, easy manufacture and sustainable criteria.

The topic of the automation, necessary facilities of light and sound, together with the design of a specific software that controls the whole deployment of the stage is a hanging topic and a great contribution for the real realization of the proposal taking advantage of the new wireless technological tendencies or laser systems that control the perfect adaptation and synchronization between the parts that are deployed.

This architectural proposal based on the application of deployable structures continuous its investigative process, motivating the exploration on this type of structures as solution to mobile enclosures, investigating the materials, connections, geometries and more suitable construction details able to support the constant movement of folding. deployment.

Deployable stage. Proposal of an application with mobile structures